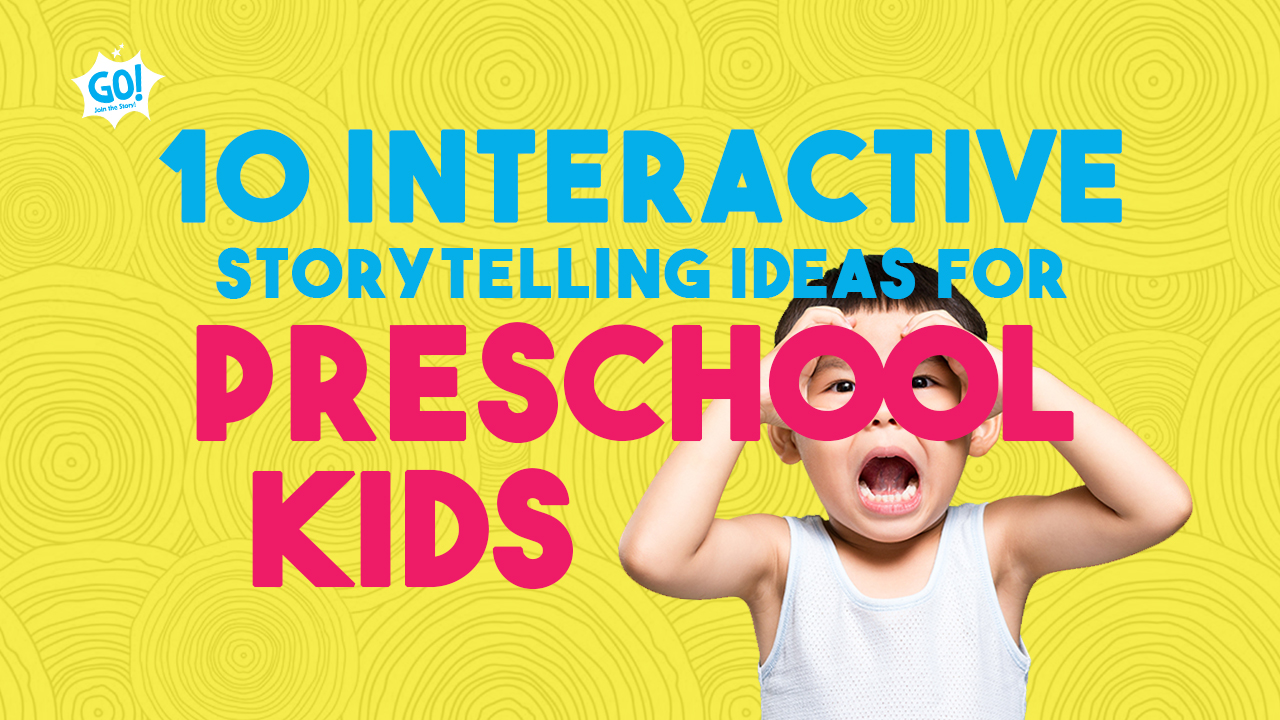 In my previous blog post, I shared 10 interactive storytelling ideas for elementary kids. But why should they have all the fun?! Preschoolers want to join the story too. In fact, when you consider a preschoolers attention span as well as their inability to sit still for very long, it's even more critical that we make our lessons interactive for them. I created the following interactive storytelling methods (and many more) for the GO! preschool curriculum, but you can incorporate them into any curriculum. Or, of course, you can save yourself some time and energy and use GO! So with no further ado, I present you with 10 interactive storytelling ideas for PRESCHOOL kids:Super Duper Picture Party This is a Pictionary style game where you draw portions of the story while the kids guess what you’re drawing. Keep the drawings simple. After the kids guess what picture you're drawing, tell that portion of the story. You can even invite some older preschool kids to draw the easier pictures.Silly Sound Factory Download sound effects that go along with the story. You can find some good ones here: www.zapsplat.com. Place one Mason jar in the storytelling area for each sound effect (shoot for 4-5). When you take the lid off of the first jar, play the first sound effect. The kids will be amazed as they'll think the sound is coming out of the jar. Tell them to guess what the sound is, then have them recreate the sound on their own. Then, tell the portion of the story that goes along with the sound effect.Say Cheese
This is similar to "Strike a Pose" for elementary-aged kids. Have the children strike different still poses that go along with the story. After they strike each pose, take a picture with your phone then tell that portion of the Bible story. Put the pictures together into a slide show or picture book and show it to the children the following week. Uh Oh Topher
Print out 4-5 pictures that correspond with the Bible story. You can find some good ones here: www.freepik.com. Ahead of time, hide the pictures around the room in a place that is at least partially visible from where the kids are seated. One picture at a time, have the children find and point out each of the hidden pictures. Retrieve the picture, then tell that portion of the Bible story. Repeat for each picture until the story is finished. (In GO!, it's Topher the Gopher who takes the pictures and hides them, thus the title.)
Jingle Jamboree
Find some props that correspond with the Bible story and put each one into a different box. One at a time, give the kids 3 clues as to what’s in the box. The clues can get progressively easier. When the clues have run out, open the box and reveal the mystery object. Use that object to tell the next portion of the Bible story. Here are example clues for the story of Jesus' birth: 1. It is an animal that lives on a farm. 2. This animal gives us milk to drink. 3. This animal says, “Moo.” What do you think it is? Then pull out the stuffed cow.Guess What
This one is similar to "Super Duper Picture Party," but it's charades instead of Pictionary. Choose 4 or 5 different parts of the Bible story that you can act out. Make them fairly simple actions to perform and guess. As the guessing goes on, the story comes to life. This or That
Place a line of tape down the middle of the room. Tell the Bible story to the children, but periodically stop and ask the kids what they think is going to happen next. If they think “this” is going to happen, have them move to this side of the room. If they think “that” is going to happen, have them move to that side of the room. Reveal the right answer then tell the next part of the story. Topher’s Egg-cellent Adventure
Print small pictures that go along with the Easter story. Cut them out and put them in some colored eggs. Picture #1 goes inside the blue eggs (for example), picture #2 goes inside the pink eggs, etc. Tell the children to hop around the room, find the blue eggs, and open them up to reveal the picture inside. Use the picture to tell that portion of the Bible story. (Again, it's that mischievous gopher who hid the eggs, thus the title.)3, 2, 1 Freeze
Have the children act out a portion of the Bible story. While they’re in motion, say "3, 2, 1…Freeze!" Then have the children freeze in place. While they're frozen, tell the part of the story that corresponds with their action. For example, during the story of Paul and Silas in Jail: Action #1: shake like you're in an earthquake. Action #2: make a scared face. Action #3: run in place. Etc. Repeat until the story is complete.Sneak-a-Peek
Print 4-5 pictures that correspond with the Bible story on 8 ½ x 11 card-stock paper. Cover each picture with 4 slips of paper, then bind the paper to the picture like a book using tape. (You can download the GO! picture cover here.) One at a time, fold the slips back to reveal a part of the picture, then have the children say what they think it is. Continue until the whole picture is revealed, then tell the corresponding part of the Bible story.
Share Tweet Pin it Fancy Add
2 FREE Bible memory activities for preschool and elementary kids Feb 08, 2019
10 interactive storytelling ideas for ELEMENTARY kids Jan 11, 2019