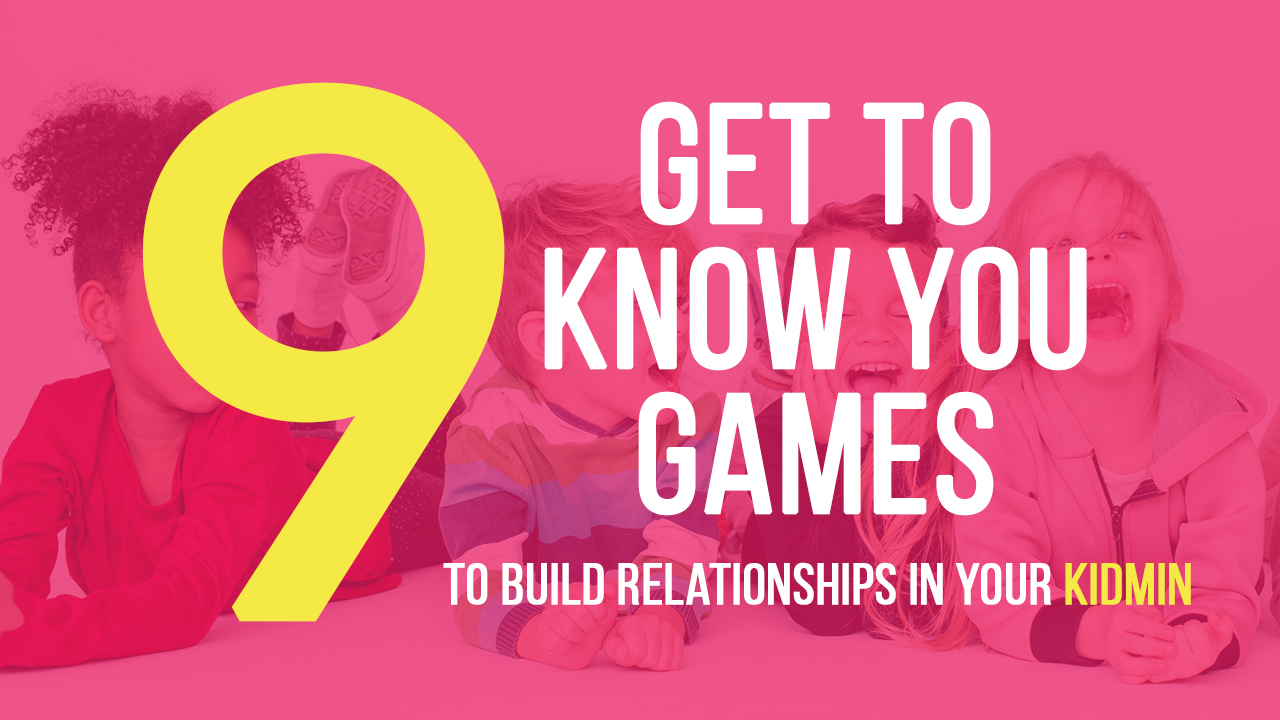 In my previous blog post titled "Here's Why Playtime Might be the Most Important Part of your KidMin," I said this: "Simply put, children learn from the people they love. And love is the result of getting to know one another—it's the result of relationship. Before our kids come to know Jesus, they just might need to know us first." It's true—education research has shown that when kids have a relational connection to their teachers and peers, they listen and learn better. So let me ask you a question: Do you want for the kids in your KidMin to listen and learn better? (I'm going to assume you answered AFFIRMATIVELY and ENTHUSIASTICALLY.)
That's the spirit!! Let me help you with that. Here are 9 get-to-know-you games you can use in your KidMin to help elementary kids build relationships with their teachers and peers. (Stay tuned for my next blog where I'll share some ideas for preschoolers.)1. All In One
This is a fun game that helps kids learn names. Have the entire group stand in a circle while holding hands. Have one child stand in the middle. The child in the middle must invite one of the "circle" kids by name to join them. That child must then invite another child by name to join them. The group of kids in the middle will continue to grow larger while the circle of kids holding hands will get smaller. The goal is to see how many kids you can fit in the middle without the circle breaking hands.
2. Two Truths and a Tale This game is a classic icebreaker for kids that can be played as a whole room or in small groups. Each person in the room comes up with three statements about themselves. Two true statements and one false (the tale). Each kid takes turns sharing their statements for the rest of the room to determine which statement they think is the tale.
3. Beach Ball Bonanza Use a permanent marker to write a different question on each panel of a beach ball. Questions might include: What would your superhero name be and what power would you have? Or...How do you show people that you care? Or...What's a memory that makes you happy? Have the kids pass the ball to each other. When they catch it, tell them to answer the question that is facing them or the question their right thumb is touching.4. Funny Face Have the kids sit in a circle and choose one kid to start the game. That kid must make a funny face in an attempt to make the other children smile. They may not make any sounds though. The child making faces receives one point for anyone they make smile. When they're finished making their face, they must "wipe" it off with their hand and pass it to the next kid in the group who will then make a different funny face.5. Thanks for the Compliment Tape a piece of paper to everyone's back. The child's name should be written on the top of the paper. Have the children mingle while using a washable marker to write compliments or words of encouragement on each other's backs. When finished, choose a child to go first. Have the child remove a sign from someone else's back, then read aloud the compliments that were shared about that person. Continue until everyone has had a turn. This is great for groups that already know each other, but also works for newer groups. They can write things as simple as, "You seem really nice!"6. Let's Stand Up Have the kids pair up with one another. Tell the pairs to sit back-to-back on the floor, then work together to stand up without using their hands. If they're successful, have two pairs join together. All four kids must sit down, then stand up together without using their hands. 7. This or That Put a line of tape down the middle of the room. Give the kids a series of "this" or "that" questions. Tell the kids if you like "this" better, move to this side of the room. If you like "that" better, move to that side of the room. Examples might include: Which do you like better, pizza or hamburgers? Or...What superpower would you rather have, flight or invisibility? Or...would you ever go sky diving, yes or no?8. The Joke's on You Write a joke on one note card and the punch line on another. Create enough unique sets so that every kid can have one joke or punchline. On your signal, have the kids walk around and try to find the punchline that goes with their joke (or vice versa). When they've found each other, have them sit down, introduce themselves and talk about something really funny that happened to them. When finished, everyone can return to the circle, share their jokes, and share some of their funny stories.9. Never Have I Ever
Have the kids sit in a circle. Each kid holds out all ten fingers and places them on the floor. One by one, each kid announces something they have never done. For example, they say, “Never have I been on a horse.” Then, all of the kids who have been on a horse remove one finger, leaving them with nine. The goal is to stay in the game the longest, so a good strategy is to say things that most people have done, but you haven't.
Share Tweet Pin it Fancy Add
7 get-to-know-you games for preschoolers Apr 19, 2019
GO! ranked #1 in an independent curriculum review Mar 05, 2019