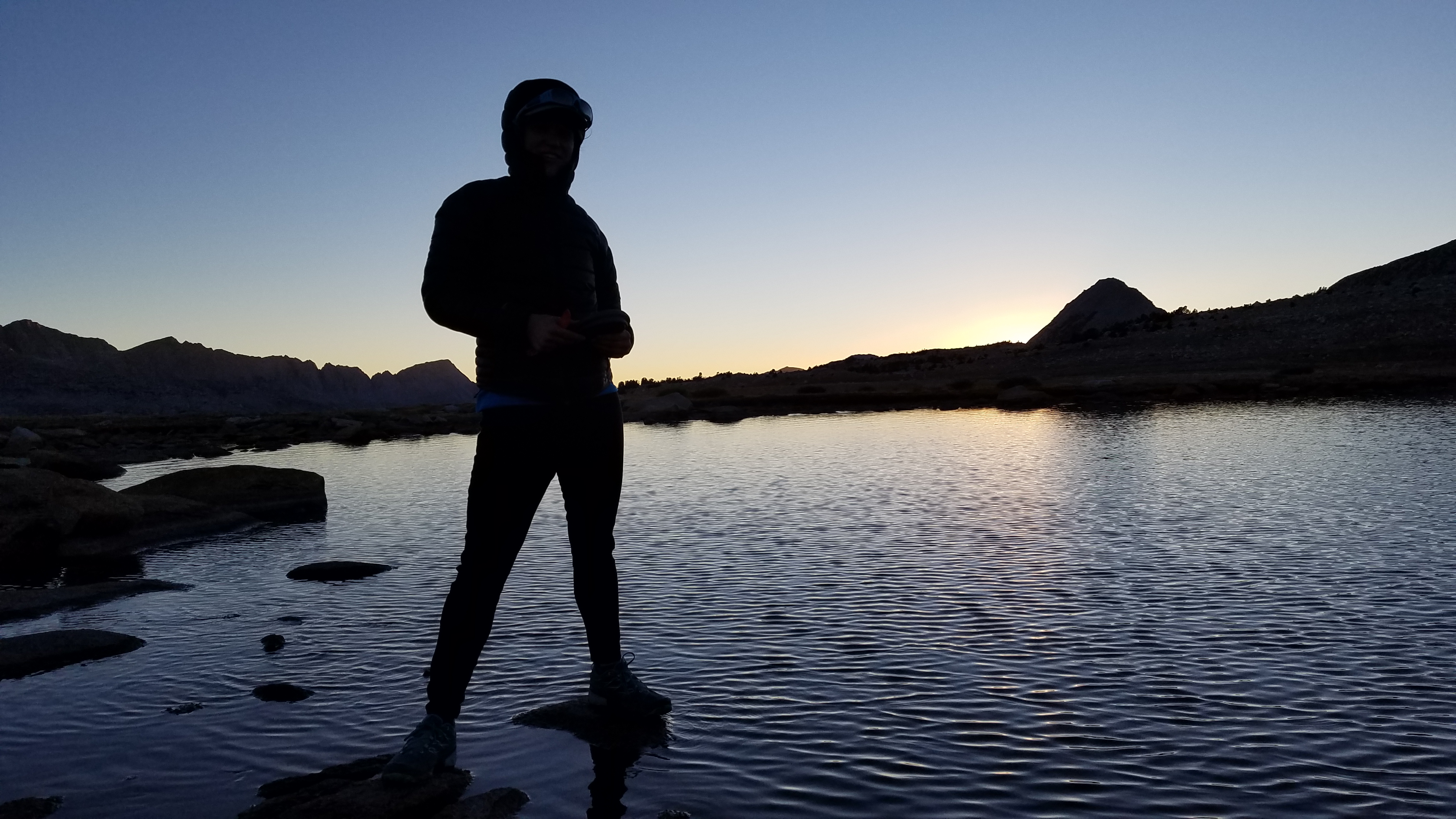 Melissa on the Sierra High Route the day before getting lost.
It was 1:30 in the morning as a helicopter hovered in the darkness above our tents. "Melissa. If you can hear us, shine your flashlight so we can locate you." That's what the helicopter kept saying over and over. More specifically, it was the co-pilot shouting through a loudspeaker. When we woke up the previous morning, we were a group of 4 backpackers traversing a section of the Sierra High Route (SHR), a rugged, 200-mile trail-less route through the Sierra Nevada Mountains of California. Now, laying in our tents during a sleepless night, we were a group of 3. Earlier that day, as we climbed a steep forested hill toward a mountain basin filled with impossibly blue lakes, Melissa fell behind. A short time later, when we noticed her missing, we stopped and waited. It only took us 15 minutes to realize what had happened. Melissa was lost. Not just lost, but lost in the middle of a mountain range that covers over 24,000 square miles--an area the size of West Virginia. With map in hand, we charted a search area and for the next 4 hours, the 3 of us fanned out, blowing whistles and yelling Melissa's name. By 6 p.m., we had searched the entire area with no luck. It was time to bring in help. I pulled out my satellite communicator and hit the S.O.S. button. Moments later, messages flew back and forth between myself and the Search and Rescue (SAR) team at the Fresno Sheriff's Department. It took some time to coordinate, but help was on the way. When people get lost, they almost always make the same mistake. Overcome with panic, they try to get un-lost. But they don't know where they are in the first place, and in the course of getting un-lost, they get even more lost. According to experts, though, there's a better way. When you're lost, instead of getting un-lost, get found.
When people first realize they're lost, they're typically within 100 feet of the trail, or in our case, the route. If they stay put and make themselves visible, they're often quickly and easily found.
Why does this matter to you?
You might not be at risk of getting lost in the mountains, but we all get "lost" sometimes. We feel lost in our jobs, in our church, in our relationships. We lose our way in life and in a moment of panic, we try to get un-lost. If we're not happy in our job, or our church, or our relationships, we jump to another one. And another.
And another.
The truth is, in those moments, we don't know where we are or how we got there. We just know that we're lost, so we keep moving, jumping to the next thing, not really knowing where we're going, and in the process, getting more and more lost. If that's you, stop. Don't get un-lost, get found. We serve a God who searches tirelessly for the lost. Whether you're lost spiritually, vocationally, or relationally, God looks for you. So make yourself visible to Him. Before you move on from your job, or your church, or your friend, call out to God and confess to Him what He already knows--you're lost and you don't know where to go. Then listen patiently for His voice to lead you back to the path. For some people, it might be a new path. It could mean finding a new job or a new church. Or it might mean letting go of an old relationship. Whatever it is, you can walk through it knowing that the all-loving, all-knowing God of the universe is guiding you in the right direction. After the helicopter first sounded overhead, it continued searching for Melissa throughout the basin and beyond before disappearing in the direction it came from. Once again, the mountains were silent as we laid in our tents waiting and wondering.
A short time later my sat comm chimed. It was a message from the SAR team. Melissa had signaled to them in the darkness with her flashlight. A nighttime retrieval wasn't possible, so they made plans to return in the morning when it was light. Despite some early mistakes, Melissa eventually realized the futility of getting herself un-lost. So instead, she stopped at a lake, high on a mountain ledge, far from the rest of us, and when the helicopter flew within earshot, she waved her headlamp like her life depended on it. With God, it's never too late to get found. It doesn't matter how lost you are or how far off-course you've gone. Make yourself visible. Call out to Him and He'll show you the way. In fact, it's when I was terribly "lost" that God led me to create the GO! curriculum. (You can read that story here.) Following one failed attempt at retrieving Melissa in the morning, another helicopter returned at noon. After disappearing for a time over a nearby ridge, it returned and landed in a small meadow near our camp.
Almost 24 hours had passed, but Melissa was back on-course. Shouts of relief. Hugs and smiles all around.
It feels so good to be found.
Share Tweet Pin it Fancy Add
5 tips for helping kids navigate the Bible Sep 28, 2018
4 steps for dealing with difficult kids Sep 14, 2018