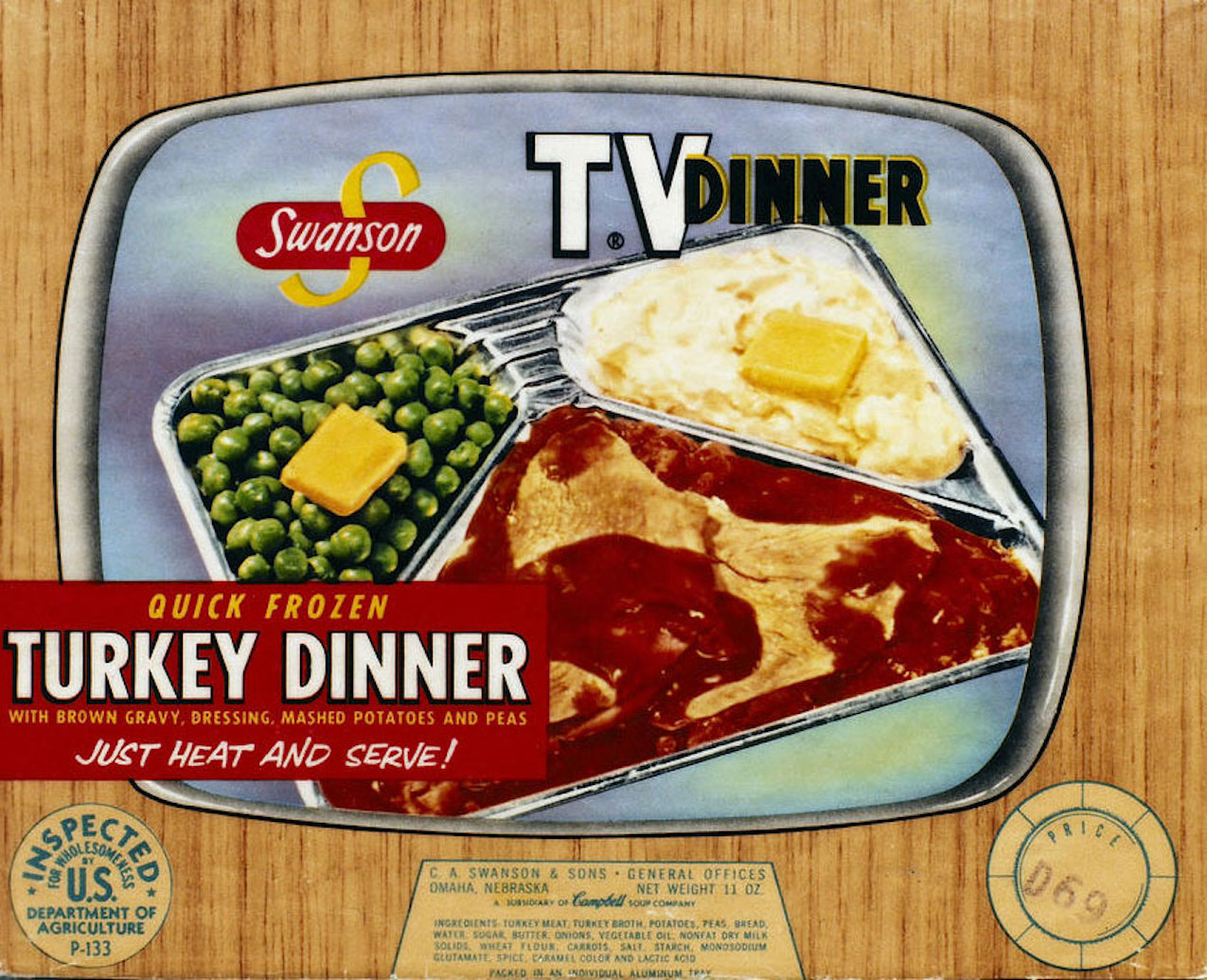 It was late November, 1952 and the Swanson Company was sitting on a huge problem—too many turkeys! Due to a stocking error, Swanson was up to their gizzards in leftover turkey, 250 tons to be exact. What in the world is a company to do with that much turkey when the country just finished stuffing its pie hole with the bird a week ago? This was the problem the employees of Swanson were asked to chew on. The story of who exactly solved the problem is a bit contentious, but most accounts hand it to Swanson employee Gerry Thomas. Mr. Thomas had just returned on a Pan American Airways flight and took note of the 3-compartment, aluminum tray the airline had recently begun using to serve their in-flight dinners. Eureka! Mr. Thomas brought the idea back to the Swanson brothers in Nebraska and shortly afterward a new product was born—the TV dinner. Packed with the leftover turkey, cornbread stuffing, peas, and sweet potatoes, the no prep meals became an instant sensation. That next year, 25 million people flocked to grocery stores and gobbled up the 98 cent Swanson TV dinners. Prior to TV dinners, women with pearl-laced necklaces slaved in the kitchen for hours preparing 3-course meals for their family. Now they could just preheat the oven to 425 degrees and 25 minutes later, dinner was served. Without really knowing it, Gerry Thomas and the Swanson Brothers had struck gold by tapping into a human desire for instant results. Of course, we know now that this was only the beginning of the craze for instant products and service—instant oatmeal, instant coffee, drive-through restaurants, pizza in 30 minutes or it’s free. And that’s just food. Most modern companies have moved heaven and earth to give us what we want and to give it to us NOW. Almost 2,000 years earlier, there was this wild man who literally walked out of the woods one day wearing camel’s hair clothes and trying to sell people a very different message. He wasn’t really a turkey eating kind of guy. Locusts and honey were more his speed. His name was John the Baptist and like Jesus, his coming had been foretold. According to Luke 1:16, John’s job was fairly straight forward—“to make ready a people prepared for the Lord.” Prepare? Frankly, that’s probably not what the Israelites were wanting to hear. They had first been told by the prophets about the coming of this savior quite some time ago. That turkey had been in the oven for over 400 years by then and they wanted the feast NOW! “You’re not ready,” John basically tells them in Luke 3. “You need to prepare. If you have 2 shirts, give one to someone who has none. Quit stealing money from each other. Quit lying and saying that people are doing junk they didn’t really do. And repent, because the Savior is coming and he’s so awesome that I’m not even worthy to take his shoes off for him.” In short, he was saying, “Hey everyone. Something amazing is about to happen, but if you don’t take the time to prepare for it, you’re totally going to miss it.” Basically, John the Baptist was telling us something that we pretty much already know—TV dinners stink! The Swanson Company certainly tapped into a human need for speed, but they made a huge sacrifice in doing so. If you’ve ever had a TV dinner, you know they’re not going to win any awards for taste. The turkey is rubbery, the gravy is watery, and the corn bread is crumbly. Even the best modern day instant meals are nowhere near as good as an old-fashioned home cooked meal. Our desire to cut corners and have things NOW has eroded the quality of the experience. John knew the power of this timeless message. His instructions so long ago to the Israelites on how to prepare for the coming Savior still apply to us today—especially as we approach Christmas. “Slow down. Get Ready. Prepare your heart. Repent.” You can fly into this Christmas at mach speed if you want, but don’t be surprised if it has all the flavor of a 1950’s TV dinner. For a lot of people, that’s probably the norm, but there’s another option—a better option. Imagine for a moment what this Christmas might be like if you prepared your heart ahead of time. What would this Christmas “taste” like if you actually followed John’s recipe? What do you need to do this year to prepare for the coming of your King? Stop for a moment—I mean right now—and start preparing the ingredients to a different kind of Christmas. “Slow down. Get Ready. Prepare your heart. Repent.”
Share Tweet Pin it Fancy Add
5 ways to retain the Christmas kids Dec 18, 2017
How to solve your parent communication headache. Nov 27, 2017